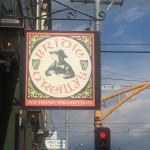 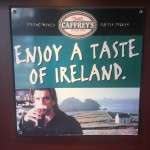 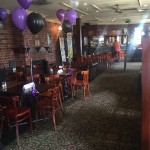 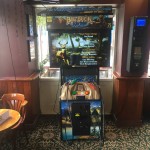 I remember the last time I was here I was 20 and here to see the guy who sang ‘Wasabi’ on ‘Australian Idol’ but he was off on ‘Idol’ duty so I just saw his crappy band without him, lives up to any expectations I had, it’s a barn, all the pay TV sport channels, huge beer garden, pool table and that hunting arcade game if you like shooting shit, wine on tap (it’s basically goon), steak costs less than a tram to the city, have a mate who used to work here he’s a physio now, sign that says “you may be photographed for commercial purposes”, isn’t ‘The Sarah Sands Hotel’ a much nicer name, lots of advertising banners, pretty empty for 5:30pm on a Saturday but should kick off at 7:30pm for Cathy’s 30th, super smiley bartender, actually reminds me of some pubs in provincial England, where else can you watch ‘Border Security’ and listen to Powderfinger at the same time, there’s totally a vending machine with chips in it, instead of a payphone there’s a phone charging station.